home
THE WORK SHOWN IN THIS SECTION WAS COMPLETED AT OUR SHOP IN OREGON
In March of 1982 Tom Stone and I drove the 35 miles to Machesney Park in the midst of a serious snow storm to pick up my "Baron". The first photo shows my car, ready for pick up, in the Machesney Park shop. In the background you can see one of the major mold pieces. This mold is made up of three pieces: the left, right and top which are bolted together, turned upside down before the mold surfaces are examined, carefully prepared, and waxed before a body can be produced. Once the fiberglass had been laid and allowed to fully cure the molds are unbolted revealing the finished car body.
Our trip back to Oregon was a challenge, but the Honda and my little trailer got us back to the Oregon shop, safely!
This photo of my 'Baron' was taken soon after its' arrival in  Oregon. My friend Tom Stone was an important contributor and collaborator on the project, and an incredible welder. The second photo shows us visualizing the placement of the engine and the passenger bucket. At this point we were considering where, and how, we would create a structure for mounting the doors while also adding structure for the cowl and the windshield. The structure we created provided stable posts for the hinges and the latch.
The additional gussets added strength to the base of the dash arch. The angular cross member, shown at the left is a support for the tail of the transmission from the Chevy donor car. The second photo shows an unbelievably strong 2" x 4" beam inset and welded to the front of the frame. Later, the actual bumper, covered with a fiberglass outer shell, will be bolted to this beam using grade 8 bolts. The third photo, at the right, identifies the proposed "cut lines" for the door and hood opening. The convertible top frame which began life on an MG will provide the basic framework for our folding convertible top.
THE FOLLOWING WORK WAS COMPLETED AT OUR SHOP IN ROCKFORD 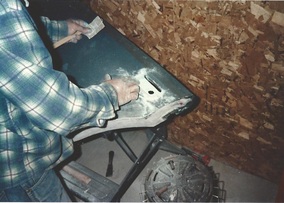 Dick creates pocket door "handle".
It wasn't long after moving the project from Oregon to Rockford that Dick Blakely stopped by and asked if I could use some help completing my car. Working as a team, we soon began making dramatic changes to the  Baron body. The first thing we discarded was the fiberglass windshield frame replacing it with a steel split-windshield frame that was also capable of serving as a roll bar. All of these changes were consistent with and complementary to the welded structures we had added in Oregon. Notice the revised 'cut-lines' for the door and hood. photo #1 The metal work at the back of the engine compartment continued back toward the windshield frame and into the cabin to create the top of the dash. photo #2 By modifying the hood we were able to install the windshield wipers, hidden under the re-designed hood. photo#3 We see the new door handle pocket and rear view mirror. Photo#4 shows Dick creating the 'pocket' on the drivers' door and including the provision for a key lock.
The Baron initially planned to include 'pod' headlights mounted between the fender and the hood. We soon learned that there was insufficient space for the pods once the hinged hood tilted forward. In addition, there were no plans for placement of other required exterior lighting. We began exploring ways to inset the headlights in the fenders. That required surgery to raise the arch of the fender enough to insert the lights in the fender while also providing adequate clearance for movement of the front tires. Our first successful plan stacked headlights above the parking/turn signal light, along with a small side marker light, all mounted flush with the body. While working on the fenders we also raised the profile of the hood (1" at the nose) to provide needed clearance for the air cleaner in the engine compartment. The third photo above shows Dick completing work on this modification. Having spent considerable time on this project we agreed that this was a good design resolution for the front of the car and that we could move on to other challenges.  But  . . . , over night, . . . Dick had second thoughts. The next day, he came to the shop early, while I was still at work. When I returned home that day I saw that he had redesigned the right fender, leaving the left fender just to show me how much better the revised design would look. The pictures tell the story. He was right! Simplicity of design should always be our goal.
This is what I saw when I came home from work. Dick's beautiful drawing shows both the front and rear of the car. The Mustang side marker lights were the perfect shape for our design. After completing the front bumpe,r work began on the rear using scrap pieces of wood, Bondo and wood filler. The tail lights from a '77 Malibu station wagon were perfectly suited to our project.
By the Spring of 1985 we had completed a radical re-design of our Baron producing a new car, the Blakely E-Class. Ready for paint, it was transported to Gary Stacy's shop in Machesney Park. Gary, a friend of Dick's, was a master painter. The following photos show the car in primer.After primer, several coats of "GM White", with a large dose of hardener, were applied. Gary had recommended we this process because of its strength, ruggedness and durability. Gary's work is about as good as it gets.
An Incredible job!  After 28 years, this finish is amazing, and seems to be bullet-proof. Once the paint work was completed the car was transported to a barn at Denny Myelles' farm where Dick had my approval to create a new set of molds of the car. They included unique molds of both bumpers, both doors, inside door panels, the interior 'bucket' and at least three molds to create the main body.
The E-Class was returned to the Rockford shop at the end of June, 1985 and began to look like a real car. In the first photo, shown below, we see the completed cowl. Along its side you can see the vertical 'door pocket' where the front of the door will pivot. At the top of the cowl you can see the slits for the defroster vents. The other photos show the dash beginning to take shape, with radiator hose slit to cover the edge of the steel dash. Also, note the drive shaft hump, the shifter and the emergency brake handle.
Wilfred Bell and I were friends from the early days of Blakely Auto Works. He had produced all of the upholstery for Bantams and Bearcats from the beginning of the company,.and had continued as a Blakely supporter over the years. He was excited to become part of my team as we visualized a functioning convertible top for this Blakely, something Dick had always avoided. The result of our effort is a functioning, folding top, a complement to this beautiful car. After 28 years, Wilfred's rear window remains clear, pliable and strong.
. 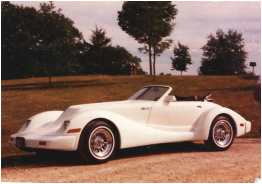 After spending seven years  developing the Blakely E-Class I was a nervous wreck the first time I ventured out of our yard with it. Once I developed enough confidence in our work and in the car, I took if for an extended drive and found myself thinking of Peggy Lee's song, "Is That All There Is?". I had spent seven years and nearly 10,000 hours focusing all of my off-time hours on building a wonderful car and suddenly realized that it was finished!  We had achieved the goal. That was in 1987. I then realized that this was just the beginning. After all of the time and effort put into the car it was time to enjoy it, to drive it. And that I did. I drove it to work daily, drove it on the track at Road America, drove it in rain, snow and ice, drove it down the Eisenhour Expressway in Chicago to cruise Michigan Avenue where it received a great response . . . some called out to us describing it as a "white Batmobile"!
In 2005 I drove it from Champaign, Illinois to Williamsburg, Virginia stopping only for gas (and the bathroom).This is a real car!
It has successfully survived a real, active life and after 28 years it still looks, rides and drives great.

​As I look back now at the vision we all had, the challenges we overcame, and the relationships we developed, I realize what a wonderful experience it has been. And this beautiful car continues as a rolling tribute to Dick Blakely, Roger Graning, Wilfred Bell, Tom Stone and others who offered their support. The value of their contributions in creating the Blakely E-Class is immeasurable.
WHAT, IF ANY CHANGES HAVE BEEN MADE TO THE BLAKELY E-CLASS? 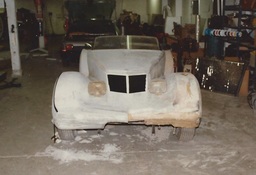 Over the years, cooling the engine has been an issue. the original expectation was that there would be adequate air entering below the bumper flowing over the engine and venting at the base of the windshield. That worked on the highway but was inadequate when you were caught in traffic. Electric fans and other 'solutions' were inadequate.
​In 2009, using masking tape, I identified the shape for the new grill opening and, with a drill and saber saw, completed the transformation. You will notice the similarity of the new nose to one of the designs I proposed back in 1980, using black electrical tape on the Baron prototype.
In 2015 it was time to replace the upholstery and to add fresh leather to the seats. A new dash was created to accommodate the controls of the updated Kenwood stereo and  Vintage Air. A Fiat glove box latch joined the MG convertible frame, and the Datsun parking lights  adding an international touch to the otherwise all American car. 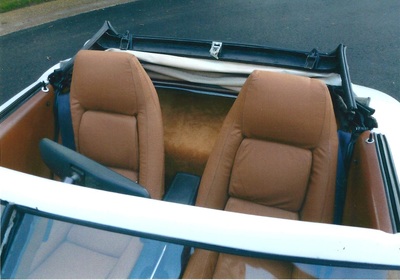 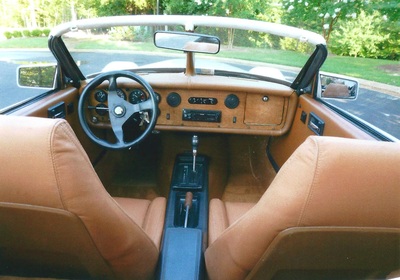 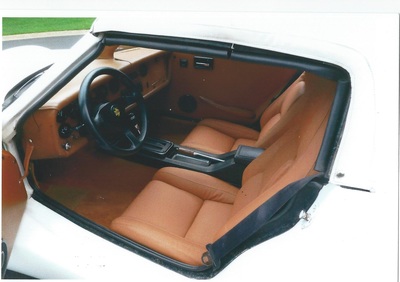 Since moving to Virginia in 2005 the E-Class has been entered in a few local shows. In September of 2015 we were invited to participate in the 31st Annual Classics On The Green and were honored to receive the prestigious New Kent Winery Award.
HOME
Copyright Virginia Motoring LLC  2016