home
The following photos, taken by Roger Graning and assembled in May of 1980, follow the early development of the Baron design. The three images at the far left are of Harry Bradley's proposed design for the Baron. He completed the full scale model using what he called "mud". In the first photo you may notice that the drivers side was not fully developed.
The photos to the right are of the #1 or #2 Baron.
​THE WORK SHOWN IN THE FOLLOWING SECTION WAS DONE IN THE SHOP AT ATWOOD CONSOLIDATED INDUSTRIES
The first of the photos in the next group, below, shows the plan for "pod" headlights on the Baron.  The first and second photos show the Baron sitting on a large elevated steel platform created by Dick to allow measurements verifying mirror-image dimensions on the left and right side of the car. The large vertical tubes are part of a steel framework with trolly wheels attached that  rolled along rails on either side of the platform. From this framework it was possible to make precise measurements of the body on both sides, and the top.
I believe the third photo is of an experiment. By attaching aluminum foil, with a light coating of spray adhesive, allowed the team to read the shape of the car and get a better sense of how it would look with a shine. The foil was temporary and removable.
Wilfred Bell and I worked together developing a series of ideas for the grill; a top for the Baron and a gas cap idea for the rear of the car.
​Electricians tape and a pair of sharp scissors came in handy as we created alternate designs to the significant nose of the car. Cardboard, a box cutter, masking tape and a hot-glue gun were used to develop a series of hardtop/soft-top profiles. In the third photo, Wilfred is shown positioning a pop-up gas filler cap from a  '71 Mustang GT.
THE WORK SHOWN IN THIS SECTION WAS DONE IN THE BLAKELY DESIGN SHOP IN MACHESNEY PARK.
The transparent 'body skin' in the photo below is the same as the one in the photo above with the aluminum foil coating. This was extremely helpful in determining, and confirming, that the frame, engine and chassis dimensions, were compatible with the final shape and dimensions of the body. A third component, the interior 'bucket' was designed to make maximum usage of the interior space. 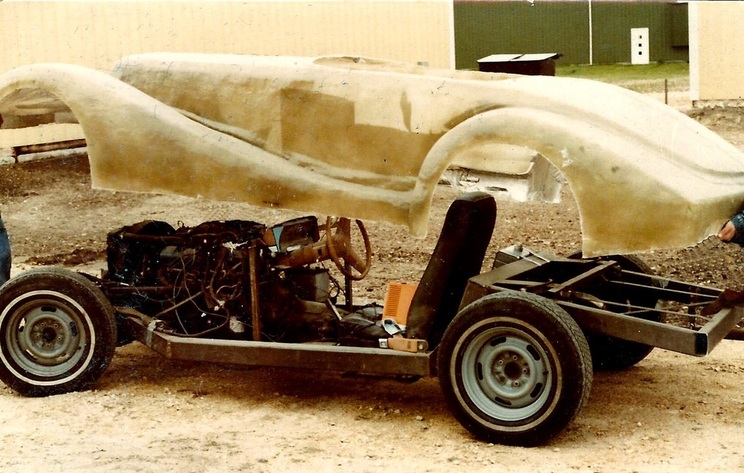 Note the extremely sturdy, wide 4" x 4" perimeter frame, hidden under the "faux running board" along both sides of the car, allowed the floor to be flush with the bottom of the frame. The 4" x 4" cross member behind the seats provides incredible strength, and safety for the center of the car. The 2" x 4" frame members leading to the  rear cross member provide great protection for the fuel tank as well. From just behind the front wheels The 4" x 4" beams extend forward from just behind the front wheels and are welded to the suspension system taken from a late 70's era full size Chevy. The rear trailing arm suspension may be from the same ar oroa Chevy Malibu from the same era. 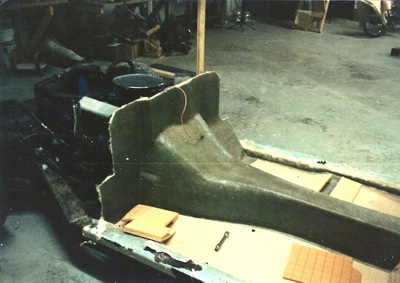 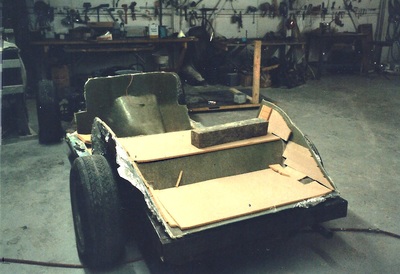 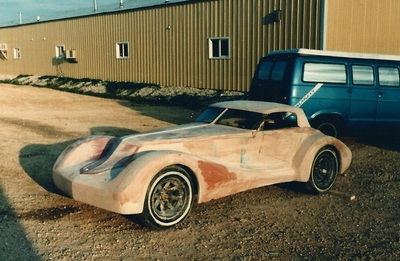 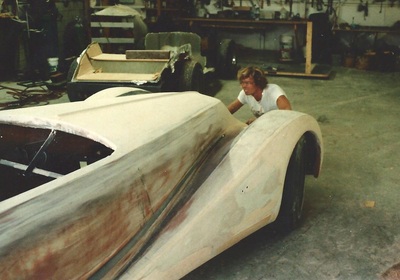 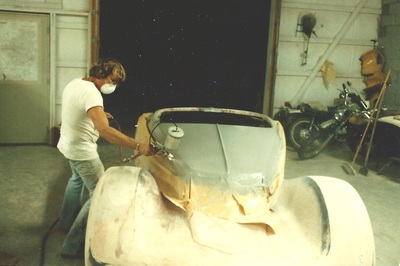 The car at the left shows some minor corrections to the surfaces of the body. Bondo is used in these final steps. The windshield frame shown here was steel. Later, a fiberglass windshield surround was added to the body. Roger Graning is shown in the other photos preparing the car for a coat of primer paint. 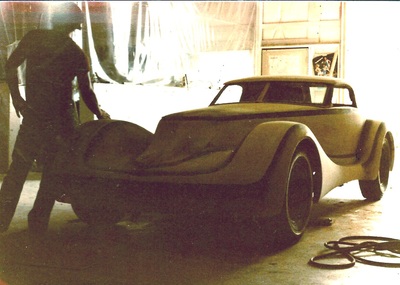 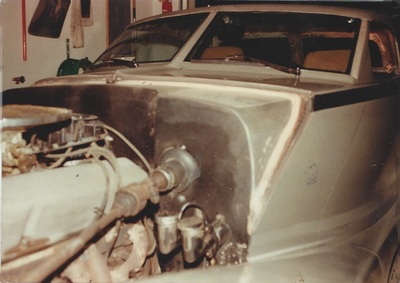 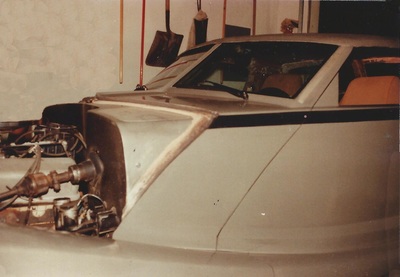 These photos are of the #1 Baron. Note the parallel 'cut lines' for the hood and door openings are the same on both #1 and #2 Barons. The fairly steep hinge angle for the door allowed great clearance from the 'running board' when the doors were opened. The exposed windshield wipers are also evident in these photos.
​The original plan for a forward hinged hood posed a bit of a problem for the 'pod' headlights. When the hood opened, the wider part of the hood had clearance issues with the headlights. Space between the hood and the fender was at a premium when considering permanent placement of the headlights.The solution, at the time, was to develop headlight modules that could be removed when engine access was needed. 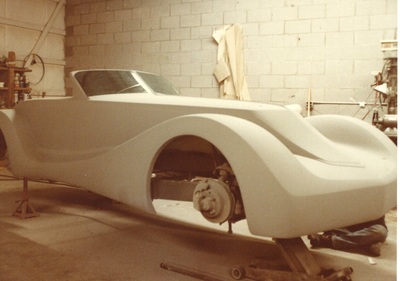 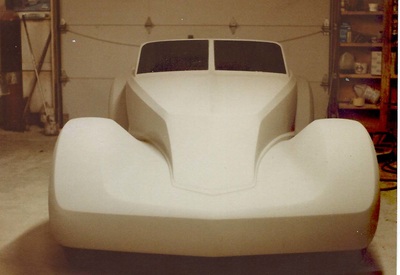 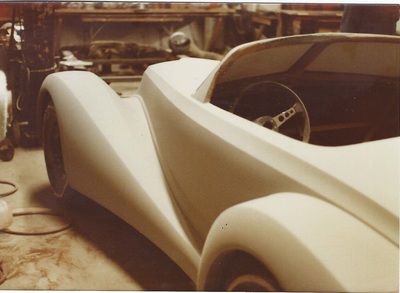 These photos are of the final 'plug' before paint.
This red, #2 Baron was likely waxed and used to create the final, three piece set of molds for the #3 Baron, later known as the Blakely E-Class.. 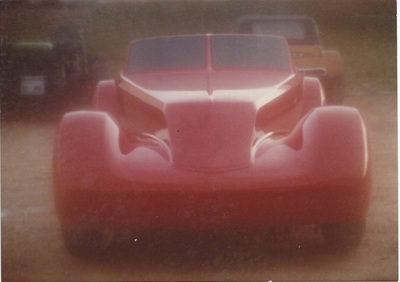 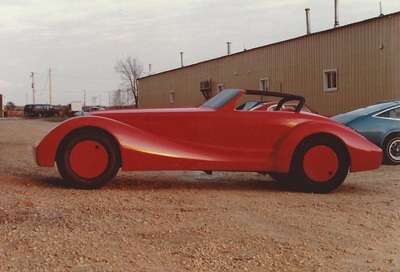 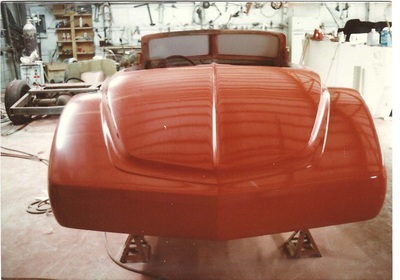 Roger Graning's contributions to this car are significant. I recall Roger and Dick coming to the grand opening of my shop in Oregon driving the grey #1 Baron, which he had been using as his daily driver. I lost track of Roger and that Baron but believe it is currently owned by an old friend living near Rockford.

​The red Baron shown below was identified in a 2009 Hemmings Blog owned by Tim Moe, a south Florida resident.  It may be coincidence, but Roger Graning was also a resident of south Florida when he died earlier this year. Is it possible that Roger sold this Baron to Tim Moe?

Note: The cut lines for the hood and door of Tim Moe's red #2 Baron are the same as those of the #1 Baron. 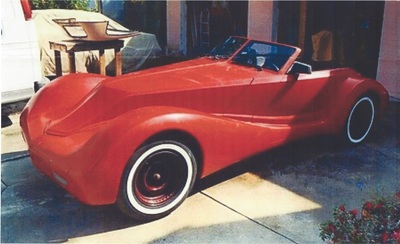 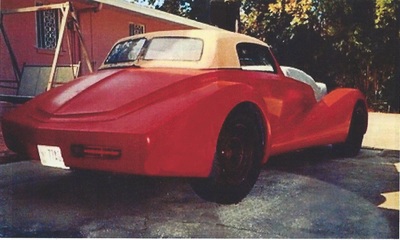 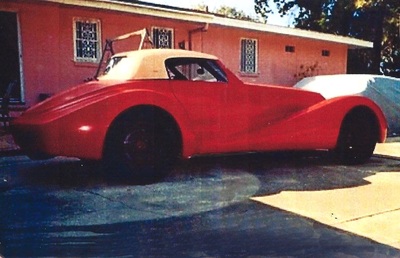